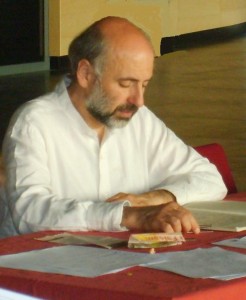 After studying organ and composition at the Musical Conservatory in Nice, Marcel Pérès pursued his musical training in Great Britain and in Canada. He returned to Europe in 1979 and specialized in mediaeval music. In 1982 he founded the Ensemble Organum where he undertook a systematic exploration of mediaeval liturgical repertoires.

In 1984 within the Royaumont Foundation he launched a European research center for the performance of mediaeval music (CERIMM: Centre Européen pour la Recherche sur l’Interprétation des Musiques Médiévales), of which he was the director until 1999.

With Ensemble Organum he released about thirty recordings, most of which have been awarded the highest distinctions : Diapason d’or[1], Classical Awards, Choc de l’année of the Monde de la Musique.

In 2001, at the former Abbey of Moissac, Marcel Pérès created the CIRMA (Centre Itinérant de Recherche sur les Musiques Anciennes – Itinerant Centre for Early Music Research), designed to be a show case, via music, of man’s migration, his thinking and his know-how over the past centuries, and to develop a mutually informative approach between living traditions and musical archeology.

Marcel Pérès’ international work was acknowledged in 1990 when he was awarded the Leonardo da Vinci Prize (Prix Léonard de Vinci) by the French Secretary of State for International Cultural Relations.  In 1996, he was made Knight of the Order of Arts and Letters.

[1] The Diapason d’Or is a recommendation of outstanding classical music recordings given by reviewers of Diapason magazine in France, broadly equivalent to “Editor’s Choice”, “Disc of the Month” in the British Gramophone magazine.