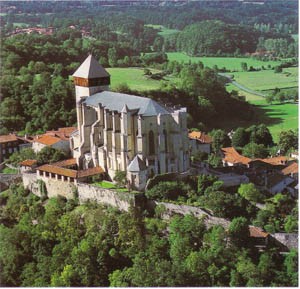 The cathedral is set on a rise overlooking the ancient Gallo-Roman city of the Convenae people. The city was in decline until Bertrand de l’Isle was made Bishop of the Comminges in 1083. After he was canonized (circa 1218), the town took his name.
Bertrand de l’Isle organised the building of the cathedral and the cloister which continued to be extended and embellished by his successors throughout the Middle Ages and the Renaissance. The cathedral of Saint-Bertrand-de-Comminges is therefore an accumulation of different styles and periods. The first two bays of the nave are vestiges of the Romanesque cathedral. Today, however, the cathedral’s architecture is essentially 15th Century (Gothic ogival arches and a polygonal choir with side chapels leading off it). From the outside the visitor’s first impression is that of a fortress: the building is surrounded by buttresses. The church is entered through a belfry-porch built in the 12th Century but modified later. The wooden hourd or platform is the result of recent restoration. The principal theme illustrated on the tympanum seems to be an Adoration of the Magi but the figure of a bishop (Bertrand de l’Isle), shown full face, is larger than the other characters. It constitutes a first glimpse for the pilgrim coming to worship the relics of the bishop who accomplished so many reforms. The lintel under the tympanum illustrates the apostles separated by arcades and columns.

Not to be missed: The Treasury, the organ, the stained glass windows and the choir of the cathedral furnished with magnificent 16th Century choir stalls. 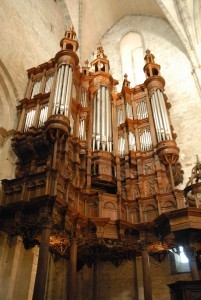 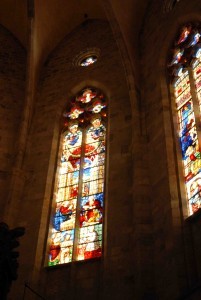 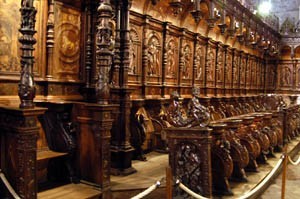 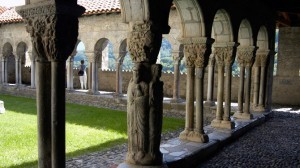 This was built from the last quarter of the 12th Century (see the Romanesque gallery on the western side) to the beginning of the 16th, when the wing along the side of the cathedral was added, distinguishable from the others by its ogival vaulting.
The Romanesque gallery is the only one with capitals showing scenes or decorated with animals, the work of talented craftsmen who had learnt their skill at the collegial church of Saint-Gaudens. In the middle of this gallery can be seen the famous “evangelist pillar”carved on the surface of a classical column. The mutilated capital above the pillar is decorated with an illustrated calendar of the work associated with each month as well as the signs of the zodiac.