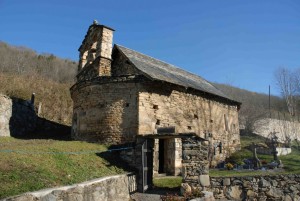 The little church in the hamlet of Bernet has an unusual design, with an apse at each end of the nave. It is built with rough-dressed local stone and has undecorated windows, giving it all the marks of dating back to the Early Southern Romanesque period, before the advances in stonemasonry that came in at the end of the 11th Century. The wall belfry is no doubt of later origin.
This little church also incorporates fragments of Gallo-Roman funeral urns or sarcophagi.