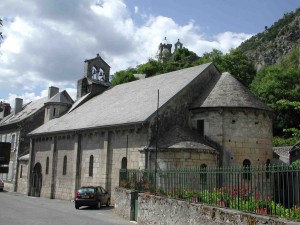 Saint-Béat is famous for its marble quarries, discovered and worked by the Romans in the 1st Century BC. This noble building material was used in the 12th Century to build the church, a major expression of Romanesque art in the Comminges.
The austere outside walls show off to good effect the few ornaments such as the medallions holding up the checkered cornice. These modo lions were the commonest from of brackets found beneath carved decorations in the Romanesque period. One example is the damnation of a miser, with a money bag hung round his neck and the jaws of a monster gaping at his feet. 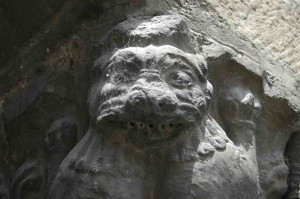 Although the doorway is relatively small, it is of great importance to the Comminges because it was the starting point in the second third of the 12th Century for the most important school of sculpture in the region. Under the chrismon is a subject very common in church tympana: Christ in Glory flanked by the Tetramorph, the four evangelists represented by an eagle for John, a bull for Luke, a lion for Mark and an angel for Mattew. But the most original aspect of the tympanum is the way space is delimited by two columns with capitals decorated with acanthus leaves, untypical fir the period, when Christ usually appeared within an almond-shaped mandorla. The master-sculptor put his signature to this work in an unusual way.

One of the four columns beside the door has a capital illustrating scenes from the Annunciation and the Visitation by Mary to her cousin Elisabeth.
Inside the church, the nave and its side aisles lead to an apse and apsidal chapels with half-domed roofs.
Not to be missed : the Treasury of the church of Saint-Béat which includes one of the oldest and richest listed collections of polychrome wooden statues, gold plate and liturgical items dating from the 12th to the 19th Centuries.