The Knights Templar, an order of soldier priest founded in Jerusalem at the beginning of the 12th Century, built a commander at Montsaunès in 1146. The Chapel, completed in 1180 and now the only remainning trace of the commander, is the present-day church of Montsaunès.
Despite 19th century restoration, the church still possesses features of Late Romanesque. It is built of brick, which shows the influence of Toulouse. The carved capitals round the two doorways are themselves worth a visit, clearly showing the influence of Toulouse sculpture. The north door led from the chapel to the other buildings of the commander. Its capitals are dedicated to the cycle of the Nativity and Childhood of Christ, with the Annunciation and Visitation, the angel appearing to Joseph and the Nativity, Mary bathing the Child Jesus, the Annunciation to the Shepherds and the Adoration of the Magi. The scenes are kept strictly apart by a technique that mediaeval sculptors used frequently: the use of an architectural framework, here platforms supported by columns. 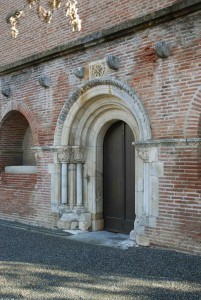 The sculpture above the west  door, although in contemporary style, is attributed to a different artist. The capitals on the left show the martyrdoms of the apostles Paul and Peter, the first beheaded, the second crucified upside-down, followed by the stoning of St Stephen. The capitals on the right show scenes from the resurrection of Lazarus.
The astonishing archivolt over the doorway catches the eye: masks that grimace, scream, show horror, calm or thoughtfulness. Above the doorway is a fine chrismon carried by angels. In contrast, the smaller south door has only a chrismon, no doubt carved by a clumsy local craftsman, attempting to copy a symbol that he did not really understand.
Also inside the church are some 13th century murals remarkable for the predominance of geometric and symbolic shapes. 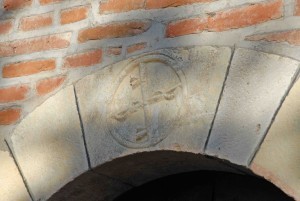