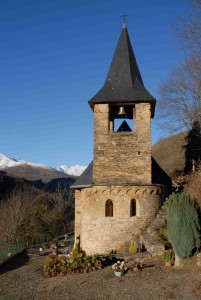 The apse of this charming mountain church is decorated outside with a friez and Lombard bands, an unbroken series of small arches marking the top wall, the most common (and almost the only) decoration found in the Early Southern Romanesque period.
A four-sided belfry, like the one at Cazaril? with large square openings, sits atop the apse. It was originally reached by a small outside staircase. 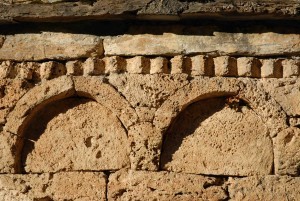 A plain, uncarved tympanum sits above the doorway. Sculpture only started to appear in the Comminges from the 12th Century.