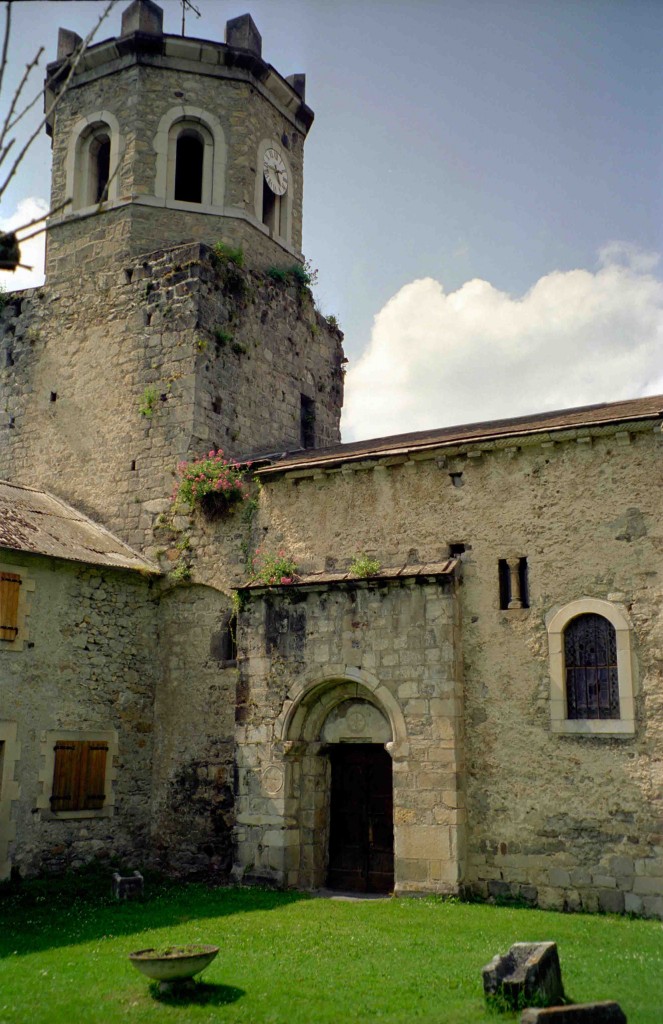 The building stands against the ancient ramparts of the village on the Piémont Pilgrims Way to Compostela wich runs through the foothills of the Pyrenees between Saint-Lizier (in the Ariège departement) and Saint-Bertrand-de-Comminges. The site was previously a Gallo-Roman burial ground. Many Romanesque religious buildings are constructed on classical sites in the Upper Comminges: at Saint-Pé-d’Ardet, fragments of burial vessels in white marble from Saint-Béat can still be seen around the church. These urns are decorated with geometrical and floral motifs and the busts of abstract figures symbolising the deceased, etc. In mediaeval times, classical sites and monuments were often used as quarries by builders as a welcome source of stones, slabs and other shapes and occasionally for decorative elements as well. Wherever classical antiquity left a rich heritage, reuse became an art in itself. At Saint-Pé-d’Ardet dor instance, the column holding up the gallery inside the church shows the high priority given to engineering considerations when reusing materials: the builders had no compunction about placing a capital upside down as a practical base for the column !
The tympanum over the doorway is decorated with a chrismon carved in a simple manner. A clumsily reused slab to the left of the doors shows a second chrismon that has been carved more delicately 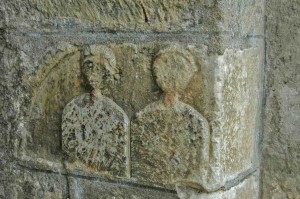 Whenthe height of the nave was raised at a later date the builders took care to replace the cornice of billets like a three-dimensional checker-board and the carved modillions dating from the 12th Century.
Frescoes from the end of the 15th Century have been conserved in the shell-shaped ceiling of the apse. Once again we see Christ in Glory surrounded by the Tetramorph, the four evangelists represented by a lion for Mark, an eagle for John, a bull for Luke and an angel for Matthew. Scenes from the Passion of Christ are shown below: a scene of the miracle where Jesus heals the ear of a servant of the high priest of the temple of Jerusalem, the kiss of Judas, Pontius Pilate washing his hand, the Flagellation, the Crucifixion and the Entombment.