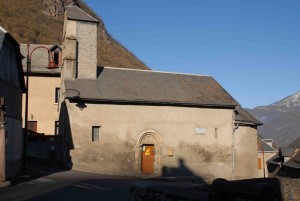 This modest Romanesque church with a single nave ending in a half-domed apse is typical of the mountain churches of the Comminges. The doorway (late 12th or early 13th Century) clearly shows the influence that the school of sculptors from the church of Saint-Béat had on the region. Here we have a local work of art, clumsy but rather touching. With his limited skill, the sculptor has tried to reproduce the carved tympanum of Saint-Béat created at the beginning of the XIIth Century. The space is divied up in the same way: Christ is set apart from the symbol of the four evangelists by rough bars instead of the swelling columns that make the tympanum at Saint-Béat so unique 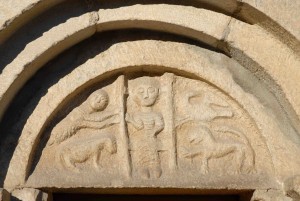